The Threshold of Life and Death: Bringing Death Home 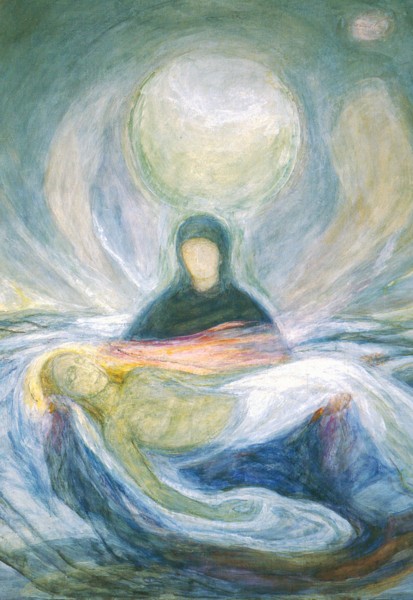 We want to let you know about a conference about dying and death that was very close to Stephanie’s heart. She herself participated in and organized similar conferences and was very active in The Christian Community and a founding member of The Sacred Threshold Guild, both of which are co-sponsoring this conference. Many of Stephanie’s close friends who were with her during and after her death are helping to organize this conference and keeping her in their hearts as they do it.

This all began when, after Stephanie died, someone sent an email out to The Sacred Threshold Guild to ask how they could set up a vigil like Stephanie’s and what formal documents they would need to make that happen. When I got that email, I knew that it was time to do another conference about dying and death. Stephanie and I had organized a similar conference in 2005 together. I think she was there whispering in my ear telling me to do it! She would have been so happy to see this unfold and continue the discussions about death that were so dear to her heart!

If you are interested in home funerals, green burials and the kind of services and home vigil that Stephanie participated in, this conference may be of interest to you. The leading figures in the death movement in Northern California will be there, several of whom participated in Stephanie’s death (including Jerrigrace Lyons) along with the premier of the movie, “In the Parlor, The Final Goodbye”.

Sanford Miller, the Christian Community priest who visits us here in Santa Rosa who spoke so eloquently about Stephanie at her funeral, will give a talk on Friday night called “Conscious Crossing”, an esoteric Christian perspective on dying and death, based on the insights of Rudolf Steiner's Anthroposophy.

If you have any questions, feel free to email me (Elinor Biller) at mailto:biller@sonic.net or call Meg McNees at (707)576-1570. Here is a shortcut link to the ticket and event information page: http://threshold17.brownpapertickets.com There is also information below about the conference.

We hope to see you there and at Stephanie’s memorial on Saturday, April 22.

The Threshold of Life and Death: Bringing Death Home

Gain a spiritual understanding and anthroposophical perspective of what is involved in this sacred time. Caring for those we love during and after death can be simple, thoughtful and deeply meaningful. It is one of the ways we can heal ourselves and our community.

a conference co-sponsored by

The Christian Community in Santa Rosa and The Sacred Threshold Guild

- Heidi Boucher presents the Sonoma County premiere of her film "In the Parlor: The Final Goodbye"

- An overview of the anthroposophical perspective on dying and death, based on Rudolf Steiner's insights and indications

- Preparing for this sacred time

- The purpose of the 3-day vigil

- What is a home funeral

- Resources available to you

(See speaker bios, below the schedule)

No one turned away for lack of funds.

For questions contact Elinor Biller at mailto:biller@sonic.net or Meg McNees at (707) 576-1570

You can view and download a printable PDF of this flyer, here:

- On Friday night, Rev. Sanford Miller gives a talk, "Conscious Crossing", introducing an esoteric Christian perspective on dying and death, based on the insights of Rudolf Steiner's Anthroposophy. He will also talk about the purpose of the three-day vigil, and the renewed sacraments and rituals at the time of dying and death as celebrated by The Christian Community, which came into being with the help of Rudolf Steiner in 1922.

- Sue Gimpel introduces the work of The Sacred Threshold Guild in supporting the 3-day vigil and home funerals.

- The Christian Community came into being with the help of Rudolf Steiner in the early 20th century. The Christian Community religious service for adults, the Act of Consecration of Man, is an open communion service. It will be held at 10:30 am (promptly) in the Eurythmy Barn near the farm at Summerfield Waldorf School. The service is followed by a potluck lunch or bring a bag lunch. All are welcome, regardless of affiliation.

- Filmmaker Heidi Boucher presents the Sonoma County premiere of her film "In the Parlor: The Final Goodbye" (1 hour 20 minutes). The movie is both a critical look at the American relationship with death and an inquiry into the home death care movement. See the trailer for the film here: http://intheparlordoc.com/

- Meg McNees of The Sacred Threshold Guild presents how to plan details for your death, and make your wishes known.

- Sanford Miller is a priest of The Christian Community who has been connected to the work of Rudolf Steiner and Anthroposophy for over 35 years. Following his university degree (Religious Studies) he lived and worked in a Camphill Community, in Aberdeen, Scotland. Then he studied in Stuttgart, Germany for the priesthood in The Christian Community where he was ordained in 1982. Sanford lives in Sacramento where he is a priest and visits Santa Rosa once a month for services. He is father to five children and grandfather to six. Sanford is insightful, inspirational, funny, beloved, and not to be missed.

- Heidi Boucher has been involved in the film and television industry for over 20 years in Oregon and California. For over 3 decades Heidi has worked as an anthroposophical home death care guide, offering Compassionate Support, Training & Workshops in both California and Oregon. Her recently released film "In the Parlor: The Final Goodbye" (80 minutes) is both a critical look at the American relationship with death and an inquiry into the home death care movement. See the trailer for the film here: http://intheparlordoc.com

- Jerrigrace Lyons is a pioneer in the home funeral movement and international death educator. She informs and guides families who wish to participate in the natural death care of a loved one, having funeral and grief rituals in alignment with their own personal and spiritual values. Jerrigrace founded the educational non-profit organization Final Passages in 1995 to inform the public about little-known funeral options, natural death care rights and practicalities, green burial and the benefits of bringing funerals back into the home and family care. Jerrigrace is a death midwife, home funeral guide, minister, educator, and Reiki Master, living in Sebastopol, CA. Visit her website at: http://www.finalpassages.org

- Sue Gimpel, of The Sacred Threshold Guild, is certified by Final Passages as a Home Death Care Guide, collaborating with families to create their own funeral and grief rituals and earth-friendly green burials. Sue is an Interfaith Minister, M.Div.C., with a certificate in Anthroposophical Counseling Psychology, integrating body, soul, and spirit. http://www.suegimpel.com

- Meg McNees has been an advocate for death and dying support since her own experience of illness 40 years ago. Her studies with Elisabeth Kübler-Ross, Waldorf Education and Rudolf Steiner's Anthroposophy have widened her understanding to welcome the transformation of death as a gateway to spiritual life. She believes that families participating in a loved ones dying process, vigil, meaningful funeral and body disposition can dispel fear, strengthen the human connection, deepen daily living and may offer spiritual growth and perspective. She is a member of the Sacred Threshold Guild and The National Home Funeral Alliance.

- Elinor Biller is the moderator for the conference. Elinor is a Jin Shin Jyutsu practitioner (similar to acupressure) and has worked with many clients as they near death. She has helped in preparing the body, creating a vigil space and organizing funerals for several community members and friends. She is very active in The Christian Community in Santa Rosa and is a founding member of The Sacred Threshold Guild.

- The Sacred Threshold Guild is a collective service group founded in 2013 in Sonoma County, California. Inspired by the wisdom of the human being, Anthroposophy, arising from the work of Rudolf Steiner, the Guild aims to provide practical and spiritual support to individuals and their loved ones throughout the transition of crossing the threshold of death. It is not affiliated with any organization and seeks to be of service to all, regardless of beliefs. Contact: mailto:STGuild@sonic.net Facebook: http://www.facebook.com/SacredThresholdGuild MailChimp mailing list signup is here: http://eepurl.com/cAQWW9

The beautiful anthroposophical artwork is by Margarita Woloschina, and may be purchased from this website in the Netherlands (use http://translate.google.com if you need the page in English): http://www.deboekerijzutphen.nl/a-39741182/pasen-christelijk/pieta-woloschina/ 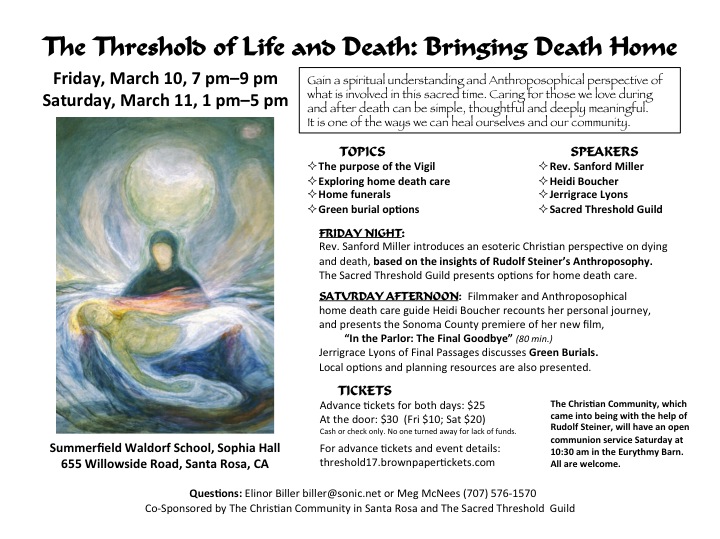 Are you or someone you know a first responder needing to be close to your patients — and safely distanced from your own family? CSC partnered with Airbnb to provide free short-term accommodations for healthcare workers responding to the COVID-19 crisis.